"He says I have grit."
"You have more than that, baby"
~  Lee Blauersouth, Secondhand Origin Stories

Opal has been planning to go to Chicago and join the Midwest's superhero team, the Sentinels, since she was a little kid. That dream took on a more urgent tone when her superpowered dad was unjustly arrested for protecting a neighbor from an abusive situation. Now, she wants to be a superhero not only to protect people, but to get a platform to tell the world about the injustices of the Altered Persons Bureau, the government agency for everything relating to superpowers.

But just after Opal's high school graduation, a supervillain with a jet and unclear motives attacks the downtown home of the Sentinels, and when Opal arrives, she finds a family on the brink of breaking apart. She meets a boy who's been developing secret (and illegal) brain-altering nanites right under the Sentinel's noses, another teenage superhero-hopeful who looks suspiciously like a long-dead supervillain, and the completely un-superpowered daughter of the Sentinels' leader. Can four teens on the fringes of the superhero world handle the corruption, danger, and family secrets they've unearthed?

After about a decade of drawing comics independently or with small presses, Lee started writing prose out of a combination of peer pressure and spite, then continued out of attachment to their favorite made-up people. They live in Minnesota even though it is clearly not a habitat humans were ever meant to endure, with their lovely wife/editor, the world’s most perfect baby, and books in every room of the house.
If you like categories, they’re an ENFJ Slytherin Leo. If you’re looking for demographics they’re an agender bisexual with a couple of disabilities. If you’re into lists of likes: Lee loves comics, classical art, round animals, tattoos, opera, ogling the shiner sciences, and queer stuff. 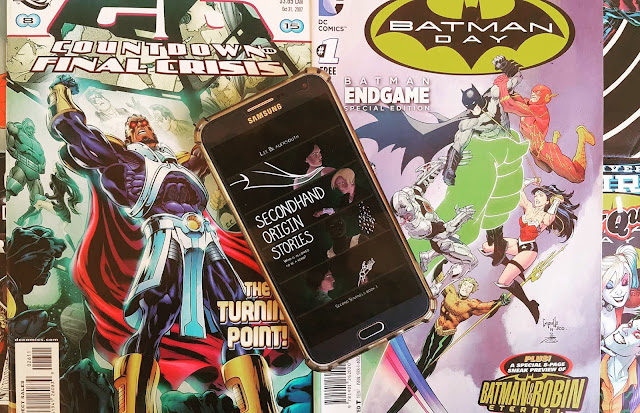 This is the first tour I joined where I got to read and review the book. Thanks to Shealea of That Bookshelf Bitch for letting me join.

So, Superheroes. We know about them and maybe one time or another we wanted to be them. Superhero movies are now a dime a dozen and people still flock the theaters to watch them and comic books have not lost their appeal (they actually have a wider fan base with adults that kids). The author has given us a glimpse of a world where becoming a Superhero is a possibility.

First thing that I noticed when I was just beginning to read this book is the authenticity of the characters - they may belong in a Superhero world but they are still like any other person who has human needs and wants. The world of these supers is not perfect and their goals don't feel forced. The word building itself is very detailed, sometimes to the point that it is already dragging. I had to skip some pages where they we're just describing things and nothing was happening. Also some elements got repeated a few times which was not really necessary.

The characterization is very psychological because we see the inner struggles of all the characters. I was just really confused about the use of xe/xyr for one of the characters without any background information as to why it is being used. I even thought it was a different character or a typo. Didn't really enjoy that.

Merits to this book go to the diverse characters and the idea of the plot. This book has a room for a lot of improvements but it is still an enjoyable read